The Importance of Lipreading

We all lipread – whether we have a hearing impairment or not. We all know when our televisions are not in sync, or if someone is miming badly. That is because our brain knows which lipshape matches each sound. And if someone speaks with their hands in front of their mouths – the visual is gone and even ‘hearing’ people can find it frustrating.

Each word is made up of many sounds and lipshapes – just take the word ‘shape’ – three lipshapes for three sounds. The start ‘sh’ the middle ‘a’ and the end ‘p’. And so it is a tricky skill to learn when needing it as an aid to hearing. However, lipreading classes bring out knowledge that we already have. Knowledge hidden so far back in our subconscious, as we all learn how to lipread when we are babies, matching those very first sounds and lipshapes that we hear and see.

But lipreading classes are not just sound and lipshape. Hearing loss can make people feel isolated and not part of conversation or community. So it is just as important to learn strategies for coping with hearing loss. Strategies such as, where to sit in a restaurant, using furnishings to take away a room’s echo, and how to find courage to say – ‘I don’t hear very well. Please look at me when you speak to me.’ 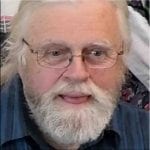 I was a competitive (and successful) shooter from the age of 14,  starting with small bore rifle (.22) in indoor ranges and later graduating to full bore (.303) outdoors.  In 1956 hearing protection was unheard of on rifle ranges, so my ears were subjected to a lot of loud noises.  The sound level of a small bore rifle is in the region of 140 dB and full bore around 170 dB.  Practice sessions usually involved each shooter firing 100 to 120 rounds and there were normally four people firing.

In my mid 30s, I frequently suffered from tinnitus, a condition which still affects me today but to a much lesser extent, as it is generally masked by my hearing aids.

During a visit to Derby Royal Infirmary for ear syringing, I was asked if I would like a hearing test.  I accepted this offer, was told that I had high frequency hearing loss and was prescribed a pair of digital hearing aids.

Two weeks later, on the 8th of March 2007, my ear moulds were ready and I was fitted with my ‘lectro-lugs’.  The first thing that I noticed was the noise level in my car.  I had thought that it was quite quiet up until then.  I was sadly disillusioned!  Early the next morning I heard birdsong for the first time in many years.  I had not realised that this beautiful sound had been missing for a long time; it must have gradually faded away.

Listening to classical music, opera and jazz has been an important part of my life, both live and through a high quality hi fi system.  Surprisingly, I did not notice an enormous difference in the sound at first.  I think that because I was very familiar with all the recordings in my collection, my brain was filling in the sounds that I could not hear.  What I did notice, and it backs up this theory, is that when my wife, a professional pianist, played her piano, not only could I hear all but the three top notes (these did not feature in any recordings that we had) I could also hear the sound of the hammers hitting the strings!

The most important job that hearing aids should do, is aid one’s interpretation of speech.  I had been aware since the beginning of the century, that I was finding it harder to understand what people were saying, especially in groups and in noisy environments.  The hearing aids helped but were not perfect.  As time went on, I was given more advanced aids from and switched to ‘slim fit’ eartubes, which were much more comfortable than the older style moulds.  However, speech discrimination was still a problem.

In 2014 or 2015, I saw a flyer from the Adult Education Centre in Long Eaton, which mentioned lip reading classes.  Cutting a long story short, I am now in my 5th (I think) year of studying this craft.  Our class usually has a dozen students, we have a tremendous sense of community as we all have similar problems.  We are taught by an inspired and inspirational teacher.  We always have fun and we learn a lot.  However, only 40% of English can be read from the lips.  Knowing the context of the conversation is an enormous help.

As far as Rotary is concerned, I almost left the club at one point.  We had left our old home due to a change of ownership.  For a while we met at a hotel, where the acoustics were so bad that I normally left a meeting with very little idea of what had transpired!  Fortunately, we moved to our current location which though far from perfect, is much better and I usually hear at least 85% of what is said at meetings.

Please click here to back to the main ‘Stories’ menu to see the other categories of stories.